Salvador Dalí was born in Figueres in 1904 and died in the same town in 1989. Dalí was one of the most important spanish artists and he is considered as one of the greatest exponents of the surrealism. [+]

Salvador Dalí was born in Figueres in 1904 and died in the same town in 1989. Dalí was one of the most important spanish artists and he is considered as one of the greatest exponents of the surrealism. [+] 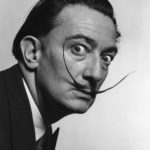 Salvador Dalí was born in Figueres in 1904 and died in the same town in 1989. Dalí was one of the most important spanish artists and he is considered as one of the greatest exponents of the surrealism.

Salvador Dalí became interested in painting in 1916 when he moved to the Pichot family country House, where it was full of intellectual artists. There he discovered the impressionism movement thanks to the Ramon Pichot art collection. During that year Dalí started his training in drawing.

In 1922 he studied at the Real Academia de Bellas Artes de San Fernando and lived in the Student Residence where he met intellectuals such as the filmmaker Luis Buñuel or the poet Federico García Lorca.

In 1923 he was expelled from the Academy and he came back to Figueres, but one year later he was readmitted. In 1925 Dalí made held his first exhibition at Galerías Dalmau in Barcelona, where he presented one of his most famous artworks: Girl in the window. In 1926 Dalí was permenently expelled from the Academy.
That same year Dalí made his first trip to Paris, where he met Pablo Picasso. In 1929 he returned to the french capital and, thanks to Joan Miró, he met the group of surrealists led by André Breton. That same year Dalí collaborated with Luis Buñuel in the movie Un perro andaluz and that summer he met Gala, who at that time was married with the poet Paul Éluard. Since that moment Gala would remain with Dalí until her death.

In the 30's Salvador Dalí found his own style. In 1933 he made his first solo exhibition in New York, a event that stablished him as a recognized artist and he achieved international fame.

In 1940, when the german troops arrived to Bordeaux, Dalí and Gala moved to United States, where they would remain until July 1948. Then they returned back to the homeland of Dalí.
During these years in America, Dalí continued with his artistic career and he developed his role as a writer. In 1942 he published in New York The secret life of Salvador Dalí. He also wrote ballet pieces like Tristan the fool (1944) and he designed sets such as Sentimental Colloquium (1944).
In addition, he made cinematographic collaborations like in 1945 when he worked with Alfred Hitchcock for the movie Spellbound or in 1946 with Walt Disney in Destino.

In the 60s and 70s Dalí became interested in new processes such as holography. This technique offered him the possibility to create three-dimentional images that gave the public the impression of space.

Dalí, during his artistic career he received different awards such as the King Emeritus, the one that Juan Carlos I, named him Marqués de Dalí de Púbol, in 1982. That same year Gala died and Dalí lost his hope for living. Dalí died in 1989.